Dangers of the Road: Auto Accidents and Highways By Steve Charpentier on March 10, 2015 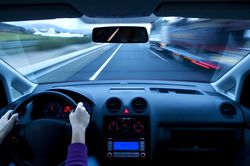 Every time a driver sets out on one of our nation’s roadways, he or she is taking a calculated risk, no matter how safe and vigilant a driver he or she may be. This is especially true of drivers who use our busiest and most frequently traveled highways, where serious auto accidents are a daily occurrence. Florida’s highways in particular are jam packed during peak hours with cars, trucks, motorcycles, and other motor vehicles, many of them driven by out-of-state tourists, frustrated commuters, inexperienced drivers, people distracted by their smartphones and other technologies, retirees, long-haul truckers, and aggressive drivers. Factor in unpredictable weather conditions, aging roads, and people who are willfully breaking the law - the drunk and otherwise impaired drivers, the reckless drivers, and the drivers who are operating their vehicles despite having had their licenses revoked - and its little wonder that thousands of people are injured or killed each year on Florida’s highways.

In cities such as Melbourne, auto accidents and highways unfortunately go hand in hand, causing untold devastation for victims and their families. In many cases, these victims are completely innocent of any blame for the accident; they were following the rules of the road to the letter and were simply in the wrong place at the wrong time. At the Charpentier Law Firm, our personal injury attorneys have devoted their professional lives to representing such victims and their families against those whose negligent or deliberately wrongful actions caused such suffering and pain. If you or a member of your family has been seriously injured in a highway auto accident, or if someone you love has been killed in such an accident, we would be honored to fight for your right to monetary compensation for the losses and expenses you have sustained as a result.

Brevard County is home to more than half a million permanent residents, with millions of people traveling to Brevard County annually to visit the Space Center Visitor Complex, Cocoa Village, the Grant Seafood Festival, and our many art festivals. It is also a highly popular destination for spring breakers. As a result, our highways are among the most crowded and potentially hazardous in the country at their peak usage.

Among the most commonly traveled highways are State Road 507, known popularly as Babcock Street; State Road 5, which is part of US Highway 1; and I-95, the longest interstate highway on the east coast, which has more than a dozen exits in Brevard County. There is also Palm Bay Road, a former state highway that links Minton Road and Babcock Street.

If you or a member of your family has been injured in an auto accident on these or any other highway in the state of Florida, you may be entitled to compensation for:

To arrange for an evaluation of your highway auto accident case, please contact the Charpentier Law Firm today.