Statistics on Auto Accidents in Florida By Steve Charpentier on August 17, 2014 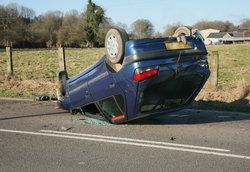 In most everyday instances, a little common sense and caution is enough to keep oneself relatively safe. However, when driving on a public road, even the most cautious of drivers cannot account for the actions of others. In fact, car accidents are now the second most common cause of death by physical injury in America, and were the number one cause for many years prior.

If you suffer injuries from an auto accident in or around the Melbourne area, our personal injury attorneys can help you build a solid case against the liable party. In addition, it is helpful to recognize the dangers of the road on a day-to-day basis, so that you may better protect yourself from a potential accident. Take the following statistics into consideration if you are a regular driver in the state of Florida.

Injuries and Deaths from Car Accidents

Statistically, Florida has a slightly elevated rate of motor vehicle deaths when compared to the rest of the country. In 2010, there were 10.67 vehicular deaths per 100,000 people across the United States, while Florida has 12.98 deaths per 100,000 residents. Although these numbers are considerably better than some other states (Wyoming has over twice this amount), it’s still a poignant wake-up call for drivers to remain wary. The following statistics from 2009 paint an even clearer picture of the road’s dangers in Florida:

These numbers do come with some optimism, however. For the past decade, traffic injuries and death in Florida have steadily declined, especially for drivers and passengers who wear their seatbelts. Still, there is still a long way to go until the state’s roads are ranked higher in terms of safety.

Pedestrians seem to face an unusually high risk of injury from motor vehicles in Florida, as noted in a recent report “Dangerous by Design 2014.” Of all U.S. states, Florida was deemed the most dangerous for pedestrians. From 2003 to 2012, 5,189 pedestrians were killed by a motor vehicle, giving it a pedestrian danger index of 168.6 - more than three times higher than the national average of 52.2 This danger seems particularly high for senior citizens, who represent a disproportionately large number of victims, walking near or along roads with a speed limit of 40 mph or greater.

It is also important to remember how age can play a factor in driving risk. After all, less experienced drivers tend to exhibit more reckless driving behaviors and are less able to react instinctively to sudden road hazards. A report in 2007 noted that Florida drivers between the ages of 15 and 19 were more likely to be involved in an auto accident than those of any other age group. Drivers in their early 20s, however, seemed to be in the most danger. Those between the ages of 20 and 24 were most at risk of being involved in an alcohol-related accident, and 21-year-olds were most likely be involved in a fatal accident caused by impaired driving.

What to Do if You Are Involved in an Accident

Being involved in an auto accident can be a shocking and unnerving experience, but by remaining calm and taking the right course of action, you can save yourself from a lot of future frustration. If you sustain any significant injuries in a crash, the first step should of course be to call for medical assistance. Assuming you are able to, it is also a good idea to record any details of the accident while you are still there. This includes taking photographs of the vehicles involved, speaking with eyewitnesses and getting their contact information, and asking for copies of any ensuing police reports. If the accident was caused by another driver’s negligence, it is also a good idea to contact a personal attorney to ensure you are fully compensated for damages. When you work with one of our knowledgeable attorneys, you benefit from having much of this evidence collected for you and scrutinized by experts. Together, we can help you receive any compensation you deserve, be it for injuries, property damage, or significant pain and suffering.

Speak with a Personal Injury Lawyer

Our attorneys are ready to speak with you about your case. Contact our firm to learn more about the legal services we provide or to schedule an initial consultation.